Python 3.7    |    Beginner
Likes 971 971
Learn how to work with lists, tuples, and strings in Jupyter notebook in Python in this 14-video course. You will discover similarities and differences between tuples and lists and see how strings are essentially just a list of characters. Begin with an introduction to lists, and then create and initialize lists in Python. You will then access and update list elements; add, remove, sort, and reverse elements from a list; execute built-in functions with lists, and create new lists from existing lists by using slicing operations. Next, examine how to extract specific elements from the original list using step size; perform list functions on strings; invoke functions on the string object; and access substrings with slicing operations. Receive an introduction to tuples, exploring the similarities between lists and tuples, then move on to understanding tuple immutability by specifying differences between lists and tuples. Then an introduction to other complex data types and using dictionaries and sets in Python. The concluding exercise concerns recalling differences and similarities between lists and tuples. 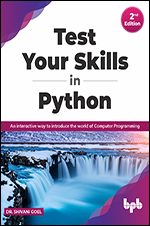 BOOK Test Your Skills in Python: An interactive way to introduce the world of Computer Programming, 2nd Edition